From Track to Treasured Pet

Most greyhounds retire from racing at a very young age due to injury or when they no longer have the drive to compete to win the race. Many greyhounds are retired from racing due to a broken hind leg.

After researching the breed, I found that greyhounds are usually a very calm and relaxed breed that doesn’t need much exercise compared to other dog breeds of relatively the same size. They are very sociable with people and other dogs—racing greyhounds are raised and live with their litter mates until they are 1 year old. They are considered sight hounds and should only be let off-leash in a completely fenced in area as they will chase small animals at speeds of 40mph and are capable of seeing prey up to a kilometer away.

Being someone that loves large dogs, I decided that a greyhound would make a good fit into my lifestyle and home. I wanted to give a home to a greyhound in need, so I searched for adoption groups and made a visit to see the dogs. During the kennel visit I viewed three dogs, but I knew after taking the first dog for a walk that he would be the one. “Mexican Bronco” or ‘Bronco’ was a 2 year old that was the tallest and skinniest of the dogs at the kennel, but he was the only one out of the 40 dogs there that weren’t barking. He just stood in his kennel with his head down looking with sad eyes. During our trial walk he never pulled once, he just walked directly beside me and stood there for cuddles and pets.

His stay at the kennel was very stressful for him as he was literally a living skeleton. I adopted him and within 7 weeks he had gained 9lbs. He is the happiest dog that loves to greet everyone and anyone with a wagging tail and a big wet nose kiss and would stand all day just to be pet. He lives up to the breeds’ nickname of a ‘couch potato’ because he literally sleeps all day long. He loves food, attention, and only needs a 15 min walk twice a day. He got along great with my two cats from day one (although the cats might not have the same feeling) and was house-trained in less than a week. I would highly recommend anyone who is looking for a quiet, loving member of the family to really consider adopting a retired racing greyhound into their home. 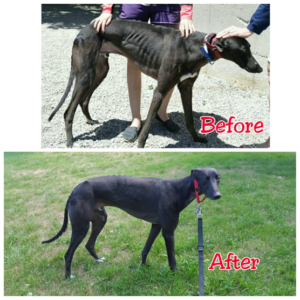