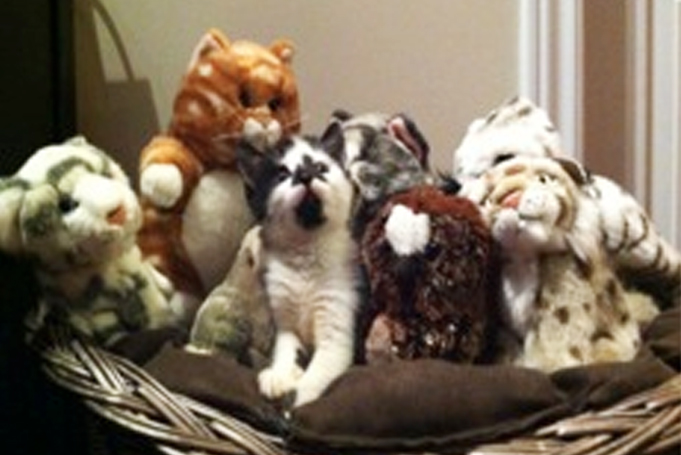 My Fostering Experience by Kylie

On April 24th, 2013 three, four day old kittens were brought into West Hill Animal Clinic. The kittens had been abandoned by their mother and were completely helpless. As soon as I saw them I knew I wanted to help. I have fostered kittens in the past – in fact my late cat Simba was only 4 hours old when I got him 19 years ago; so I knew what I was in for. The kittens were all boys and were pretty sick. They were under weight, dehydrated and had bloody diarrhea.

They were so tiny they needed to be bottle fed special kitten formula. For the first week I was up every hour feeding them. When kittens are that young they cannot go to the bathroom on their own – their mother usually licks their back end to stimulate them to urinate and defecate. Since I was now their mom and not willing to lick their behinds, after every meal I had to take a damp warm cloth and rub/pat their behinds to make them go to the bathroom.

foster pic 3 After about a week to a week and a half the biggest kitten who we referred to as “Panda” fell very ill and passed away. All of the doctors here at West Hill Animal Clinic tried to save him, but nature took its course. I was devastated but all of the staff here were so kind and compassionate and one of the doctors took me aside and explained that in nature cats have multiple kittens in one litter to try and ensure that at least one survives and that without my help none of them would have made it. Even though I was upset, having the doctor put it into perspective for me really helped.

Over the next couple of weeks the little grey kitten; that we referred to as “Grey”, was slowly going downhill. His black and white brother “PurrPurr” (because anytime anyone touched him all he did was purr), was growing like a weed and getting stronger and stronger each day, but little Grey still had bloody diarrhea and was actually losing weight. At 7 weeks old Grey died in my arms at home. With examinations, fecal testing and blood work, there was no diagnosis to why this happened. Once again I was extremely upset but I didn’t take it personally – myself, as well as the entire staff of West Hill Animal Clinic did everything humanly possible to help Grey.

The lone survivor was PurrPurr. Even from the beginning I felt I had a special bond with him. His personality was a perfect mix of my current cat Lynx and my late cat Simba. I lost Simba to kidney disease back in February and I didn’t think I would ever recover. The night Grey died I knew in my heart that PurrPurr was the next member of my family and I decided to adopt him. PurrPurr is now a healthy 7 month old kitten with absolutely no health concerns. He is an energetic kitten who does crazy ninja jumps off my furniture and walls, but he also loves to lay with his mom and cuddle. I feel so blessed to have had this experience and thankful to all of the amazing staff at West Hill Animal Clinic for helping me along the way.