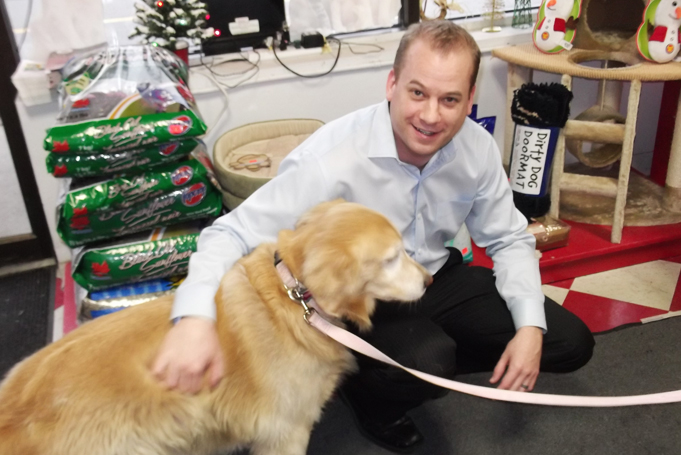 The Christmas season is upon us and veterinarians will invariably see many pets come in with problems related to this time of year. Many of these conditions can be prevented with just a little common sense and foresight. Here are the Top 5 categories of issues that we see at this time of year. West Hill animal clinic wishes you a wonderful holiday season and you’re pet a happy and safe one as well.

Along with cold weather comes automobile maintenance. We frequently need to top up our antifreeze levels in our radiators and as everyone knows, it’s hard to do without a least a little bit of spillage. Be sure to clean any puddles up thoroughly as our cats and dogs are attracted to its sweet odor. Drinking antifreeze has a severely toxic effect on the kidneys which can lead to acute renal failure and death in many cases. Symptoms include vomiting, lethargy, anorexia, and collapse.

Neighborhood cats are always looking for a nice warm place to have a nap. Unfortunately many of them will find it under a car. The warmest place happens to be directly under the fan belt. When an unsuspecting driver first starts up the car, the fan belt will whir into action which can lead to significant trauma. Often a laceration occurs on the cat’s back towards it tail as it jumps to race away from danger. It’s a good idea to take a look under your car before starting it or at least bang the hood to scare off a hiding kitty.

Cats love chewing on long cords and ones with lights on them offer an even greater attraction. Chewing through the rubber coating will expose the electrical wires within. I’ve seen it time and time again where cats have been brought in with marks around the mouth from electrical burns. The shock they receive will traumatize the tissue and at its worst, cause electrocution that may be fatal to our feline pets. The tree becomes one big hazard with blinking lights that says ‘come and play on me!’ Placing the string of lights higher on the tree is not good enough since cats are such good climbers. If you have cats in the house, you may want to avoid decorating the tree with lights all together.

If you have decided to bring in a real Christmas tree, then many people will place a water source at its base to keep it healthy through the season. The addition of chemicals or nutritional additives to the water is frequently done as well. This now becomes an inappropriate water source for your pet. Stagnant water with sap from the tree and possibly chemical additives is sure to cause irritation of the stomach lining if ingested and can lead to vomiting. Considering an artificial tree or simply not ‘watering’ the tree would avoid this danger.

Dusting off the box marked ‘Christmas decorations’ is often the first step in getting our home ready for Christmas. These items will add to a festive atmosphere, but they also greatly transform a pet’s playful world. All of a sudden there are many shiny items that can capture their attention that aren’t appropriate to play with. It’s important to create a festive but pet-friendly environment as you decorate.

Any string of any kind is always fascinating to a cat. I have no idea why this is, I just know it’s true. Tinsel is deadly. There’s so much of it that you’ll never know a single strand is missing if it is ingested. We call these linear foreign bodies that can wrap around something in the stomach while the free end travels down the intestine. The result is a sawing action that occurs as the intestine slowly contracts to propel food down itself while the string stays stationary. This can lead to an intestinal perforation causing an abdominal infection and severe pain. Without surgery, this will likely be fatal. If you have cats in the house, tinsel is simply best to avoid. String from presents will create a similar danger and should be avoided as well.

Ornaments around the home can be dangerous in a similar way. Cats love batting and pawing at these items. Many delicate ornaments will easily fall and break into small sharp pieces that a cat may step on or swallow. Its best to take extreme caution in selecting the items you choose to decorate your home with. It’s always helpful to get low to the floor and look at your home from the pet’s perspective. This can give you a better idea of what will be accessible to them and then you can ‘pet-proof’ your home from there.

Flowers and plants are common decorative items that we use at Christmas time which can pose a significant hazard to our pets. Contrary to popular belief, Poinsettias are NOT a major concern to dogs and cats. The sap in them and the prickly vegetative parts to them may be irritating to the mouth and stomach lining, but they are not toxic beyond that. The biggest concern is Lilies, Mistletoe, Mistletoe berries, Holly, Holly berries and Rosemary. Of this list, Lilies are by far the most toxic with Mistletoe berries a close second. Lilies are frequently used in bouquets and are often overlooked. Some Lilies will cause mouth irritation, but others such as Tiger, Asian, Japanese Snow, Easter, Stargazer and Casa Blanca lilies will cause severe kidney failure in even small amounts. Mistletoe berries will cause gastrointestinal upset but in larger doses can cause abnormal heart rhythms, weakness, seizures and death. Keep in mind that Potpourri mixtures and especially simmering potpourri liquids are also toxic. Not only can they cause severe chemical burns around the mouth, but in larger amounts can cause vomiting, weakness, difficulty breathing and organ damage. So practice caution when adding flowers and potted plants to your home at Christmas time and if you want to create a festive scent, consider non-toxic candles rather than potpourri combinations.

Some would say that gastronomic overindulgence is the best part of the holidays. This is how we often love our pets, by spoiling them with goodies and treats. Every Christmas brings dogs and cats with pancreatitis, an inflammation of the pancreas caused by a high fat or high protein meal or treat. Most pets receive a very consistent diet and have difficulty dealing with these treats we bestow on them at the holidays. Throwing the dog a big juicy piece of turkey may seem natural but it can have serious consequences such as causing stomach upset or pancreatitis. This manifests as vomiting, diarrhea, abdominal pain and lethargy. Mild pancreatitis can be treated with a bland diet and antibiotics, but more serious forms can require hospitalization. Try to control you’re treat giving and limit it to simple treats made for pets rather than human food.

Turkey bones are another treat we may throw the dog during this time of year. Some dogs will be able to chew and ingest bones without a problem, but many can have severe trouble with them. Sharp shards and splinters of bone can irritate the stomach and intestines, and at its worst, puncture the gastrointestinal tract causing an abdominal infection.

Always a staple treat at Christmas time, chocolate is often offered in abundance during this season. Chocolate has a chemical called theobromine which has an activity similar to caffeine. Overdoses of theobromine can cause vomiting, diarrhea, muscle spasms, seizures, fatal heart arrhythmias and coma. As a general rule, the darker the chocolate, the more theobromine is present in it. For a 40 lb dog, a potentially lethal dose of milk chocolate is 20 ounces, whereas unsweetened cocoa or baking chocolate can be lethal at only 5 ounces. Along with the chocolate, dogs will frequently ingest all the wrapping that surrounds it, creating further stomach upset. The best way to avoid this is to simply keep it out of reach of our pets.

Hopefully you and your pet have a happy and safe holiday season!!