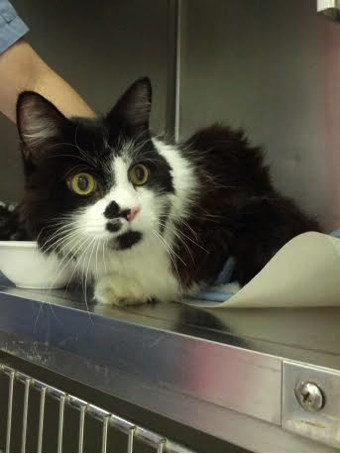 This is my pal Monty. He is an 11.5 year old kitty who is full of life and loves his food, however, 1 month ago when we first met this was not the case. One of the main reasons Monty’s owner brought him to the clinic is because he wasn’t eating. Monty is normally a great eater. He was also very lethargic and dehydrated and these symptoms were only worsening with time. Unlike in human medicine, our patients do not have the capabilities of telling us what is wrong; therefore, we rely a lot on the owner for help, along with various diagnostic tools in the clinic.

Two tests we often start with are blood and urine testing. In Monty’s case, they immediately identified his underlying concern. He had diabetes. In fact, it was such a raging case of diabetes that his body had entered a stage that is referred to as DKA, or diabetic ketoacidosis, which is a medical emergency.

Diabetes is a condition where there is an excessive amount of blood sugars or glucose in the bloodstream. This is caused by a lack of insulin. DKA occurs in extreme cases of diabetes when there is a severe loss of glucose regulation. Cells in the body require glucose for energy. When they are starved from glucose (a process which occurs from diabetes), all last resources are utilized. When this occurs, there is production of compounds called ketone bodies. When ketone bodies are burned for fuel, this causes the pet’s metabolic system to go completely out of whack, leading to life threatening pH and electrolyte imbalances. This can then lead to shock, dehydration and potential death. It’s no wonder that Monty was so lethargic and dehydrated!

Monty had excessive amounts of glucose in his blood; so much so that there was glucose detected in his urine. Glucose should never be found in the urine. The urine test also showed that he had ketone bodies in his urine. His electrolytes were so out of whack that he had to be hospitalized and placed immediately on intravenous fluids that had electrolytes added. Monty also had to start receiving insulin shots under the skin to control his blood sugars. His blood sugars had to be monitored daily until they started returning to normal. Similar to human diabetics, animals with diabetes must also get fed a strict diet so Monty’s feedings had to be monitored and he had to be force fed until he was interested in eating on his own.

HOW DO I RECOGNIZE DIABETES IN MY CAT BEFORE IT IS TOO LATE?

Diabetes is seen more frequently in middle to old-age cats and it is more common in males than females. The most common clinical signs seen in diabetic patients are an increase in water consumption and urination. Weight loss is also a common feature, and an increase in appetite may be noticed in some cats. In Monty’s case, these were not the main signs seen because his body was in crisis mode. If your cat is showing any of these symptoms, it is important that at minimum, a blood and urine test be performed to confirm diabetes or rule out other potential diseases.

HOW IS MONTY TODAY?

Monty was in for a check-up recently and I am happy to report that he looks great. His blood and urine were re-checked and revealed that his electrolytes were back to normal and that there was no glucose or ketone bodies seen in his urine. He was well hydrated, had great energy and according to his owner, was eating up a storm at home. Monty now receives daily insulin injections which keep his glucose at normal levels and his diet is also closely monitored. Although this will likely be a life-long journey for him, with careful monitoring, Monty should live a full, happy life.