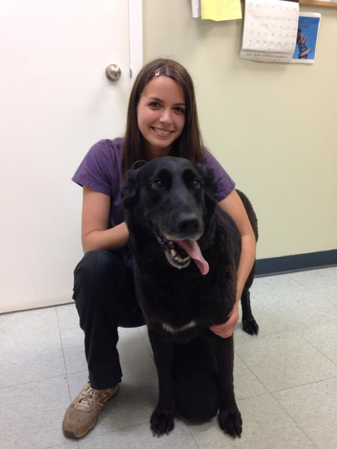 When you hear of success stories you probably automatically think of life saving heroics that even “Dr. House” would have been proud to be a part of. Aero’s story may not be as glamorous as other lifesaving procedures such as an exploratory, gastropexy or splenectomy – but it was, and continues to be, one of my favourite success stories during my 13 years of working as a technician at West Hill Animal Clinic.

Aero came to us in 2010 to have her nails trimmed. She had previously been to other places that had a VERY difficult time trimming her nails. Her owner was told that they no longer were able to cut Aero’s nails because she was just too difficult. I was there for her first nail trim with us. I can remember it not because of how she acted or what happened; but because of where we are today with her. She was scared; in fact she was terrified. With one glimpse of the nail trimmers she was a complete wreck. It didn’t take us long to decide she needed to have a muzzle placed on her. Most dogs respond really well to being muzzled during their nail trims and it acts almost as a hug or calming reassurance. It did help to settle Aero down, but it wasn’t nearly enough to make her comfortable with trimming her nails.

I remember her first nail trim because by the time we were finished she had urinated and evacuated her bowels everywhere, to the point that we needed to clean her up. I am pretty sure I thought to myself, “I wish I never have to cut that dog’s nails again”, but she did in fact come back for another nail trim. Previously, she was using her paws and nails to scratch us and push us away, so this time we tried to put her into lateral position (on her side) with two technicians holding her to trim her nails. This is usually a very effective technique. Often when dogs are placed on their sides for nail trims, they feel more comfortable and don’t struggle at all. This was not the case with Aero. We did get through the nail trim, and again urine and feces were everywhere.

The third time Aero came back for her nail trim we decided to try another approach with her. We had already tried other approaches that usually work with frightened dogs and she really wasn’t responsive. So this time we decided to try using less restraint. We took it slow – we gave her treats and we trimmed a very little amount off her nails to ensure we didn’t ruin her experience by hitting her quick. She wasn’t co-operative to say the least, but it was a small improvement. We asked if her owner could start to handle her paws at home. The next time she came in we used the same approach: slow, treats and a small amount of nail trimming. Her owner was so diligent and brought her in often so we could trim her nails. Each time we used less restraint and we were able to cut more and more off her nails.

Eventually, with a lot of patience, love and perseverance, from both the owner and our staff; Aero overcame her fear of nail trims. Aero comes in monthly now for her “mani and pedi” and she is an absolute pleasure. A dog I once dreaded dealing with has become one of my favourite dogs to see in the clinic.

I often speak about her story and I have even teared up thinking about how far she has come. I am so proud of our team for taking the time to make it a positive experience for Aero. I honestly believe without our care and dedication, Aero would still have her debilitating fear of having her nails trimmed.