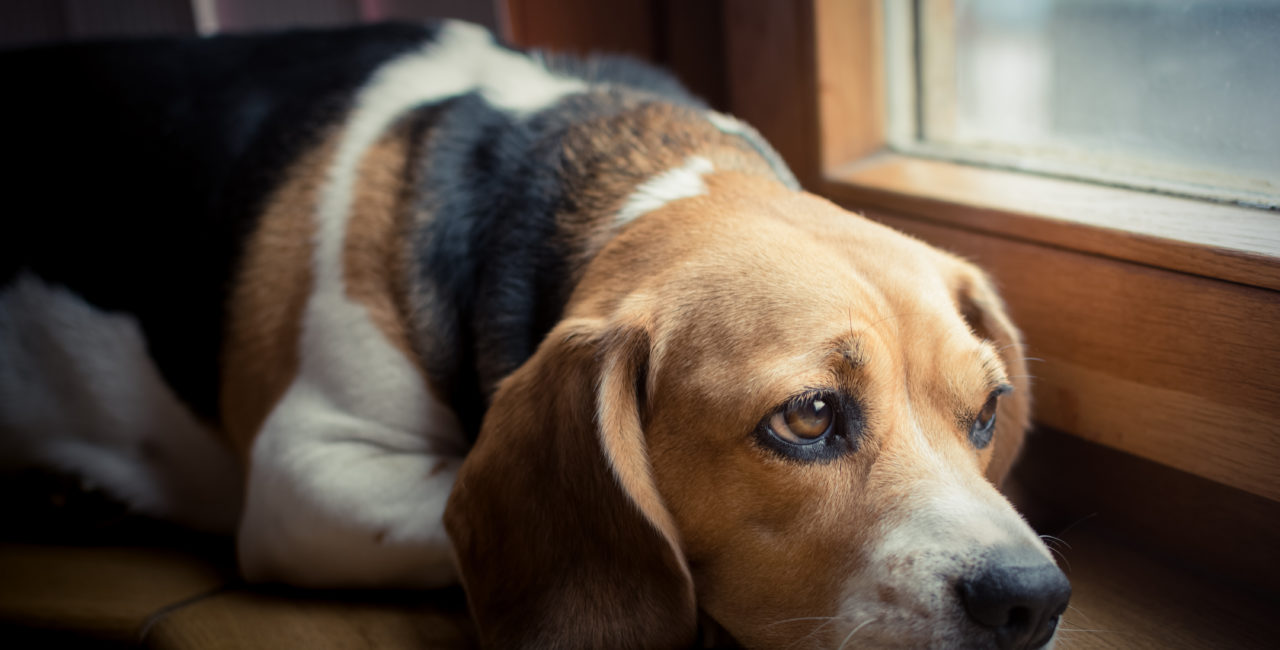 Back Pain in Dogs

The dog with back or neck pain presents challenges both for owners and veterinarians.  Signs can be acute or chronic, and many dogs will present with a hunched back, and a dropped neck with a reluctance to engage in activity.  Often they may be obviously painful (whining, crying out at times) but sometimes the signs may be vague or non-specific (for example the appearance of lethargy could result in a number of conditions).   Because some of the signs are non-specific, it will often be prudent to perform some tests (bloodwork and x-rays).

The history of spinal discomfort can be acute, but owners should remember that most spinal problems result from changes in the spine that have been building up for a long time.  So, although disc disease and arthritis of the spine is usually noted as a sudden appearance of pain the underlying conditions that resulted in the damage to the disk and caused the inflammation that led to arthritis were likely present and caused gradual changes for some time prior to the onset of symptoms.

There are two main areas where problems occur in the spine – the intervertebral disks and small joints down the length of the spine called facets between the vertebrae.  The discs can become weaker and less able to handle motion over time and are prone to either a ruptured or bulging and calcification.  Arthritis can occur in the facets.  In addition, instability of the spine can lead to chronic changes in the bones themselves resulting in a proliferation of bone growth meant to compensate that is known as spondylosis.  All of these things the body can manage to a degree, but with the spine, we always have to deal with the presence of the spinal cord and the nerves that exit the cord throughout its length.

It is the interaction of these spinal changes and the nerves that result in the pain.  Intervertebral disks that either rupture or bulge directly into the spinal cord can cause the acute onset of pain and steadily worsening paralysis below the point of effect.  In the case of worsening paralysis, surgery is warranted to decompress the spinal column to prevent permanent damage within the spine.  If the disk protrusion or rupture occurs away from or to the side of the spinal cord, we still get a great deal of pain because of interaction with the surrounding muscle and sometimes the nerves exiting the spine but often without any paralysis.  The important thing to remember, however, is, in this case, the severe pain is often temporary and can be managed.

As mentioned above, when a dog presents with acute pain of the spine, x-rays and bloodwork are warranted.  X-rays (aka radiographs) are important to rule out more serious conditions of the spine and aid in diagnosis.  There are some limitations depending on the type of problem.  Spondylosis, calcified disks and some tumours are readily visible, and a relatively narrowed disk space is an indication of disk rupture.  However, some disk protrusions result in primarily soft tissue changes which are less obvious.  Bloodwork is done both to rule out other problems that could cause similar symptoms as well as get a sense of underlying health.  Some of the medications we use to treat back pain should be avoided if there is any evidence of kidney or liver compromise.

In cases where paralysis or weakness is present, ideally, CT scan of the spine provides the most information.  In fact, even in cases with pain but no deficits CT scan can provide useful information, but cost and availability often become a factor.

Once we rule out other conditions and can localize the pain to the spine, then we focus on management.  The two aspects are pain control and activity restriction.  When we want to reduce stresses on the spine, dogs should be kept on leash when outside at all times and high impact activity should be avoided.  In addition, support getting up with a towel acting as a sling under the belly may be needed to help the dog into a standing position and can help getting around and up and down stairs.  Owners may have to assist in the acute situation with bodily functions (eating, drinking, urinating and positioning for defecation) but hopefully only for a short period.  Dogs do not think about consequences and when they start feeling better will run after squirrels and play with younger dogs, but this should be avoided if possible.

The best medications for this situation are known as NSAIDs (non-steroidal anti-inflammatory drugs).  These medications are related to aspirin, but we have specific medications that are better tolerated by the dog and cause less gastrointestinal effects.  The reason for the efficacy is that they treat both pain and inflammation which are the two main factors.  Dogs with back pain will usually see a significant improvement in pain control while on these, but neurological deficits may or may not improve.  Unfortunately, these medications are broken down by the liver and excreted by the kidneys, so a blood profile prior to administration is needed.

Once pain has improved, medications for long-term management can be considered. Glucosamine supplements, omega-3 fatty acids and PSGAGs (polysulfonated glycosaminoglycans) are all good options that reduce inflammation and improve conditions within the joints.  Every dog is an individual and will respond differently to different medications.  If one medication does not result in improvement, another can be considered.

The hope is to get the dog to a place where they are able to return to a functional level of mobility with relative freedom from pain.  For some dogs and owners, this may not be possible, but a significant portion will see improvement.  Unfortunately, there is a degree of progression of the condition.  If there are no other health issues, dogs with back pain will gradually worsen over time and may need more than one medication where initially one sufficed.  In some cases, alternative approaches such as acupuncture may be helpful.  If the pet is deteriorates despite medications and activity restriction, then the quality of life comes into question and euthanasia may need to be considered.  However, most dogs will maintain a decent level of mobility for quite some time giving owners more time to enjoy their companionship.